Casa Zicatela, Mexico. At the top of a hill, looking across an agave plantation towards the mountains in the east, and to the celebrated surf-spot, Playa Zicatela, in the West.

Designed as a weekend escape. Drawing from the architecture of the Aztecs, lead architect Ludwig Godefroy has created a space that functions around outdoor living areas and gardens in a style unique to the ancient temples that populate so many coastal sites in Mexico.

Godefroy moved to Mexico in 2007 to work as an architect at Tatiana Bilbao’s studio, after a stint at OMA in Rotterdam. "What I like about working in Mexico is to be able to revisit such varied references without the weight of history," says Godefroy. "I can combine pre-Hispanic influences with brutalism in an unvexed way."

In 2014 Godefroy started working on Casa Zicatela, a beach house in Puerto Escondido, Oaxaca. The house is modelled on a Mesoamerican ballcourt, with its central element flanked by large, symmetrical stepped walls. "In a way, the design was borne out of constraints," says Godefroy in reference to the budget and the 280 sq m plot of land. "The more constraints you have, the more radical your choices will be."

Made entirely of concrete (apart from the tropical- inspired wooden doors and shutters), the glassless three-bedroom house very much resembles a bunker from the outside. Inside, its strong and geometrical features create a powerful play of light and shadow, bringing life to the open living space, garden and swimming pool.

"The light in Oaxaca is glorious," says Godefroy, who cites Carlo Scarpa and Louis Kahn as major influences. "You’re not restricted to living in one room, it’s all adjustable." He points to the large shutters, which, once closed, create a physical divide between the otherwise unenclosed spaces. 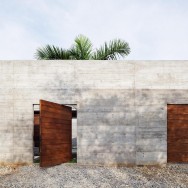 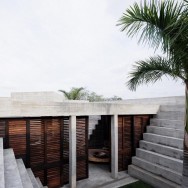 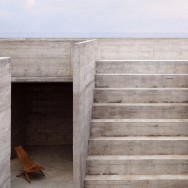 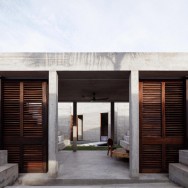 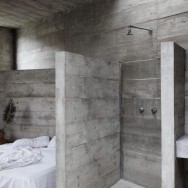 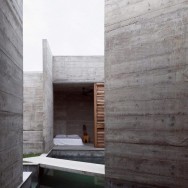 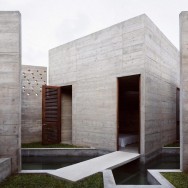