New York based interior agency Home Studios nails it perfectly with one of their latest projects:  the West Hollywood bar Bibo Ergo Sum. L.A.'s coolest new bar interior at the moment perhaps, where every single element but the chairs can be called their own design.

The designers from Home Studios interpret interiors as visual stories. "We view interiors as visual stories, and nothing gets us more excited then combining a lot of diverse influences and shaping the story from that interaction.”
The list of inspirations that went into the Bibo project is quite remarkable. "The striped columns were partly inspired by a trip to the Siena Cathedral,” says Haslegrave. “We also looked at Alvar Aalto — a continual influence — Antonio Cardillo, French New Wave cinema posters, and films themselves, from the style of Band of Outsiders to the production design of The Graduate and 2001: A Space Odyssey, also a continual influence." 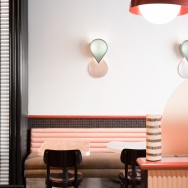 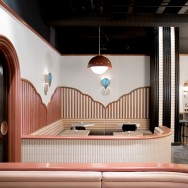 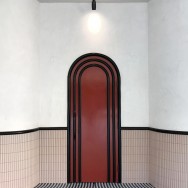 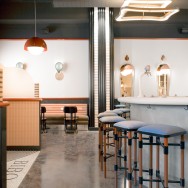